My Potcake, Flipflop, is a mix of a lot of different breeds, however; the one breed that is dominate in him is the Jack Russell.  Jack Russell’s are very smart, intelligent dogs, as is Flipflop.  They are also very high energy, as if Flipflop!  Flipflop, Dahlia and I go for a lot of long walks and when we’re lucky we find a safe place for Flipflop to run, play fetch, wrestle, or play tug.  Even when he’s tired, he loves to play and today was no different.

After our morning walk (including some fetch and wrestling), Flipflop contently went to bed as soon as he finished his breakfast.  I ran out and did some errands and when I got home an hour later, Flipflop was ready to go again.

I put him and Dahlia on their leashes and off we went.  We got to the large fenced off baseball field, used in the summer by many dog owners as a safe place for our dogs to run and play off leash, it is now locked up for the winter.  I knew Flipflop could fit through the opening in the gate, so let him go off on his own. He had so much fun running and sniffing on his own, while Dahlia and I waited for him outside of the field. 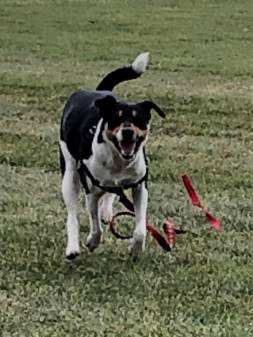 When  Flipflop had his full of running he ran back to the gate where Dahlia and I were waiting.  It then occurred to me that in his excitement to run free he ran through the opening with no hesitation.  But now that he was no longer excited, he didn’t have the momentum to run through the gate and with every attempt would back away, fearful.

It broke my heart because I knew he was so worried and upset that he was trapped away from Dahlia and I.  I crouched down, encouraging him to come to me.  I had his leash in hand and tried to gently pull him through, but as soon as he got his head out he’d back away again.

After a few minutes, I remembered I had some crumbs left of duck jerky in my pocket.  Flipflop (and Dahlia) love duck jerky, and I sometimes carry it with me on walks to work on some training reinforcement with them.  As soon as I remember I had the bag in my pocket (even with only crumbs left in the bag), I pulled it out.

As soon as Flipflop saw the treat bag out of my pocket, he poked his head through the gate.  I put some crumbs on my hand, and called him to me, he backed away again. So I put some excitement into my voice, while I encouraged him.  I could tell he was still really unsure, but the smell of duck jerky was too much to resist.  And with a slight pause, Flipflop barreled through the gate and gobbled down the crumbs of jerky.

He then jumped up for a hug (he loves to be hugged) and we continued our walk home.  Mental note to me, not to let Flipflop go through the gate alone again, unless I have some trusty jerky in my pocket!